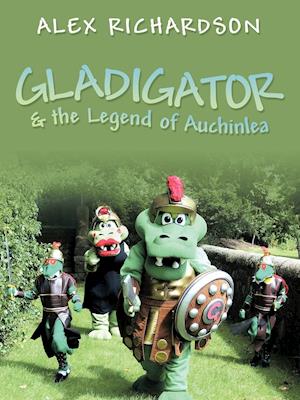 Gladigator is the children's champion of Rome. He and his family were given the gift of having their ages frozen in time by the gods of the ancient druids. His ancient rival is the dreaded Tyrannous and his Gladiators, who made a pact with the devil that allowed them to fight in all the great wars in history for two millennium. However, during this two thousand year pact, Tyrannous did not bargain on the Gladigator being around to confront him at every turn. The Gladigator first defeated Tyrannous in the Circus Maximus, to win his freedom. However, the emperor deceived the children of Rome by ordering his men to capture Gladigator. Gladigator knew he had to get out of the Roman empire and heads for Caledonia, Scotland. He knows that the Roman empire stops a Hadrian's Wall and that he would be safe in Caledonia. The story focuses on Gladigator's incredible journey from Rome all the way to Auchinlea in Glasgow, where he eventually settled down. Follow his many adventures along the way, culminating in the fantastic showdown with Tyrannous and his men in Auchinlea Park, where they reproduce the ancient Circus Maximus of Rome in the heart of Auchinlea Park, whilst the whole of the 21st century world holds its breath for the outcome of this final conflict between good and evil. The book is also highly educational, with much historical research, ranging from the ancient fighting styles and weapons of Rome, to the many ways of life of ancient cultures, such as the Gauls, the druids, and the Caledonians. The book is also crammed full of Glasgow's history, including the Bishoploch, Provan Hall house, and Blairtumock House, just to name a few. It is also based on the real-life Gladiator programme of Glasgow and the real-life Gladigator mascots. This is a fantastic swash- buckling children's adventure that allows fiction to fuse with real history, teaching history in an informative and exciting way for children. Whether you are an adult or a child, there is much to learn and tremendous fun for all. Once you start reading this captivating, non-stop action adventure, you will not be able to put it down.