- Welfare and Imprisonment in 1970s America

indgår i serie Politics and Society in Modern America 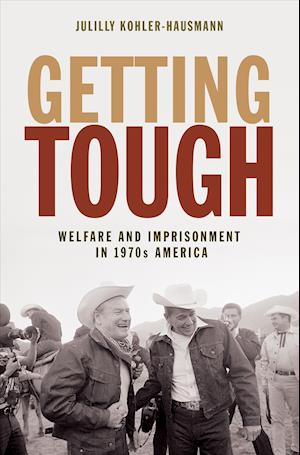 The politics and policies that led to America's expansion of the penal system and reduction of welfare programs In 1970s America, politicians began "getting tough" on drugs, crime, and welfare. These campaigns helped expand the nation's penal system, discredit welfare programs, and cast blame for the era's social upheaval on racialized deviants that the state was not accountable to serve or represent. Getting Tough sheds light on how this unprecedented growth of the penal system and the evisceration of the nation's welfare programs developed hand in hand. Julilly Kohler-Hausmann shows that these historical events were animated by struggles over how to interpret and respond to the inequality and disorder that crested during this period. When social movements and the slowing economy destabilized the U.S. welfare state, politicians reacted by repudiating the commitment to individual rehabilitation that had governed penal and social programs for decades. In its place, they championed strategies of punishment, surveillance, and containment.The architects of these tough strategies insisted they were necessary, given the failure of liberal social programs and the supposed pathological culture within poor African American and Latino communities. Kohler-Hausmann rejects this explanation and describes how the spectacle of enacting punitive policies convinced many Americans that social investment was counterproductive and the "underclass" could be managed only through coercion and force. Getting Tough illuminates this narrative through three legislative cases: New York's adoption of the 1973 Rockefeller drug laws, Illinois's and California's attempts to reform welfare through criminalization and work mandates, and California's passing of a 1976 sentencing law that abandoned rehabilitation as an aim of incarceration. Spanning diverse institutions and weaving together the perspectives of opponents, supporters, and targets of punitive policies, Getting Tough offers new interpretations of dramatic transformations in the modern American state.