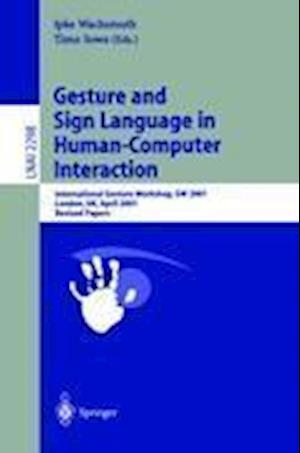 The international gesture workshops are interdisciplinary events for those - searching gesture-based communication and wishing to meet and exchange ideas across disciplines. A focus of these events is a shared interest in using gesture and sign language in human-computer interaction. Since 1996 international g- ture workshops have been held roughly every second year,with fully reviewed post-proceedings typically published by Springer-Verlag. Held at City University,London,April 18 - 20,2001,and attended by more than 70 participants from all over the world,Gesture Workshop 2001 was the fourth in a highly successful workshop series. It was organized in association with the British HCI Group,a specialist group of the British Computer Society. As its predecessors in 1999 (Gif-sur-Yvette),1997 (Bielefeld),and 1996 (York),GW 2001 aimed to encourage multidisciplinary collaboration by providing a platform for participants to share,discuss,and criticize both research in progress and more complete research with a multidisciplinary audience.Consistent with the steady growth of research activity in this area,a large number of high-quality submissions were received,which made GW 2001 an exciting and important event for anyone interested in gesture-related and te- nological research relevant to human-computer interaction. In line with the pr- tice of previous gesture workshops,presenters were invited to submit their papers for publication in a subsequent peer-reviewed publication of high quality. The present book is the outcome of this e?ort. Representing the research work from 10 countries,it contains a selection of 25 articles,and 8 short papers re?ecting work in progress.