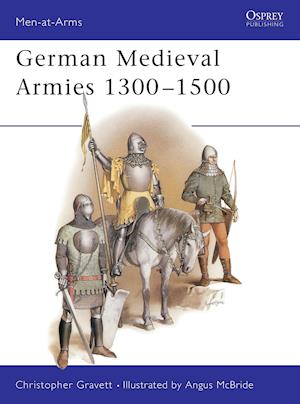 The German rulers were forceful and powerful men, and, surrounded by potential enemies, circumstances dictated the necessity of rule by strength based on military capacity. In the later 15th Century, three houses rose above the others; the families of Wittelsbach, Luxemburg and the powerful Austrian Hapsburgs. The struggles of these and other houses, and of the knights and towns, were to be a feature of German history throughout the Middle Ages. This title details the dress, weapons, heraldry and insignia of these prolific forces, as well as various battles, such as the Battle of Goellheim of 1298.

Forfattere
Bibliotekernes beskrivelse An unrivaled source of information on the uniforms, insignia, and appearance of the world's fighting men of the past and present. This series offers detailed information on the uniforms and insignia of the armies; a definitive analysis of their armour, weapons, tactics, and motivation; comprehensive histories of the design, development and operational use of vehicles and artillery; and concise, authoritative accounts of decisive encounters in military history.