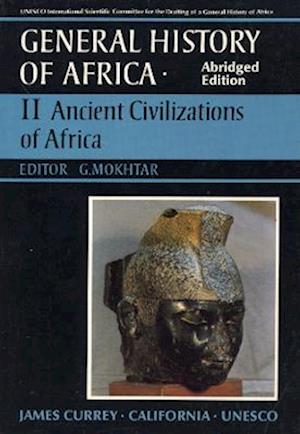 Volume 2 covers the period beginning at the close of the Neolithic era, from around the eighth millenium before our era. This period of some nine thousand years has been sub-divided into four major geographical zones. Chapters 1 to 12 cover the Nile, Egypt and Nubia: by far the largest part of the book is devoted to the ancient civilization of Egypt because of its pre-eminent place in the early history of Africa. Chapters 13 to 16 relate to the Ethiopian highlands. Chapters 17 to 20 describe the Maghrib and its Sahara hinterland, and Chapters 21 to 29 the rest of Africa including some of the Indian Ocean islands. The series is co-published in Africa with seven publishers, in the United States and Canada by the University of California Press, and in association with the UNESCO Press.

Forfattere
Bibliotekernes beskrivelse SPECIAL COMMENDATION in Africa's 100 Best Books of the Twentieth Century. The series is illustrated throughout with maps and black and white photographs.