Gender, Race, and Office Holding in the United States

- Representation at the Intersections

indgår i serie Routledge Research in American Politics and Governance 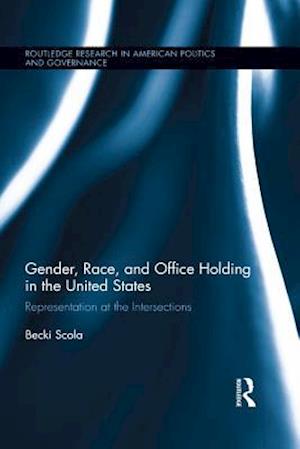 Over the past several decades, the number of women elected to higher office in the United States has grown substantially. However, when the electoral gains of women are considered on a state-by-state basis, there are observable variations in the rate by state at which women are elected to state legislative office. Scholars have noted an additional variation in women office holders: that women of color serve at higher rates than white women.Becki Scola's book provides an explanation for these two interrelated puzzles on electoral gender gaps. She examines the factors surrounding the uneven proportional distribution of female legislators, and then explores why gender appears to be an advantage for women of color office holders. Through an examination of the divergent state-level institutional and environmental conditions, Scola maps out the factors that contribute to more, or less, female legislative service and how race/ethnicity intersects with these conditions. She reveals that the common conceptions and theories that help us understand women's office holding in general do not equally apply to both white women and women of color's legislative service..The first book-length study to analyze how race informs gender in terms of patterns of office holding, Gender, Race, and Office Holding in the United States provides insight into both underrepresentation in general as well as the underlying dynamics of representation within specific groups of women.