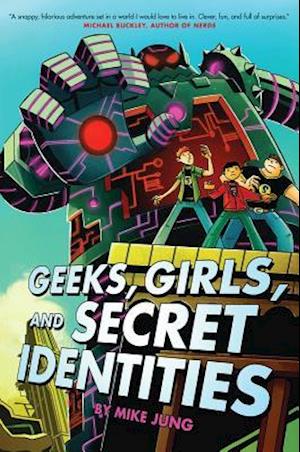 Can knowing the most superhero trivia in the whole school be considered a superpower?

If so, Vincent Wu is invincible.

If not (and let's face it, it's "not"), then Vincent and his pals Max and George don't get any props for being the leaders (and, well, sole members) of the (unofficial) Captain Stupendous Fan Club.

But what happens when the Captain is hurt in an incident involving BOTH Professor Mayhem and his giant indestructible robot AND (mortifyingly) Polly Winnicott-Lee, the girl Vincent totally has a crush on?

The entire city is in danger, Vincent's parents and his friends aren't safe, the art teacher has disappeared, and talking to Polly is REALLY, REALLY AWKWARD.

Only Vincent Wu has what it takes to save the Captain, overcome Professor Mayhem, rally his friends, and figure out what to say to Polly. But will anyone take him seriously? Seriously. Anyone

Find out in this action-packed super comedy debut.

Forfattere
Bibliotekernes beskrivelse Twelve-year-old Vincent and his fellow members of the Captain Stupendous Fan Club help out when someone new becomes Earth's most famous superhero, without knowing anything about him, just as evil Professor Mayhem and his robot arrive in Copperplate City.