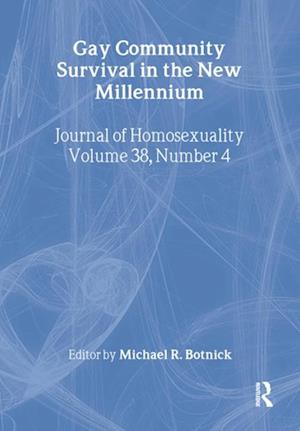 Understand the international challenges facing gay male societies! This eye-opening account examines the idealistic, structural, and emotional meanings of community within the gay population. Gay Community Survival in the New Millennium explores the concept of gay community as well as the problems and progress that these communities are facing in the United States, Canada, and Israel. As a community leader, gay rights advocate, or policymaker, you will gain insight into issues that must be addressed now in order to strengthen your own community. Gay Community Survival in the New Millennium explores many of the fractures in gay society that must be addressed to ensure progress in the gay liberation movements, including: racial and ethnic divisions in the gay community, especially based on HIV-positive and HIV-negative status, and programs that work to bridge this gap the rift between HIV-positive and HIV-negative gay men based on the allocation of money for social programs meant to support entire gay communities AIDSphobia, the irrational fear of contracting the virus and how it has affected gay communities the Israeli gay rights movement, which is visibly pursuing full and equal citizenship in Israel, including acceptance into the Israeli military projections for gay rights movements in the future if homophobia continues to exist the enormous power that would be created if all gay and AIDS social organizations in a given geographic region banded together to influence change in social policies and eliminate stereotypesGay Community Survival in the New Millennium explores what it means to be a gay man in today's communities, from the fear of AIDS and the need for financing of gay men's social programs to forming a collective organization that will work for the gay men's liberation movements. This essential guide will provide you with suggestions to help you shape and successfully change your gay community.