Garvin of the Observer 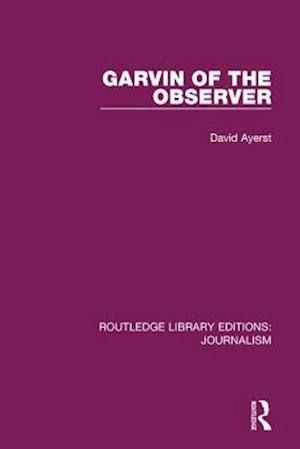 Originally published in 1985. One of the most distinguished editors in the history of British journalism, J. L. Garvin created the Sunday newspaper as we now know it. His career at the Observer spanned the golden age of the British press when newspapers had a powerful influence on political affairs.Like the other great editors of the first half of the twentieth century Garvin clashed with his proprietors. He liked to contrast 'Responsible Editorship' with 'Austensible Editorship' where the editor took his political orders from the owners. He passionately believed that the readers of any newspaper worth buying had a right to know what the editor himself thought about any important matter. This was the essence of an implied contract, the basis of trust between paper and the reader. It was Garvin's energy and integrity which transformed the Observer into a major force in the British press so that long before his death most respectable middle class families would have hesitated to admit they had not seen the Observer.This first substantial biography of Garvin of the Observer will be of interest to all students of modern political history and of the press in contemporary society.