- A Band of Brothers 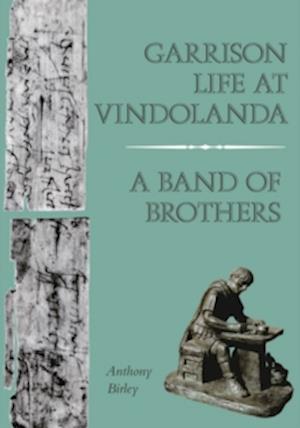 The ink writing-tablets, first indentified at Roman Vindolanda, just south of Hadrian's Wall, in 1973, revealed a hitherto unknown papyrus-substitute, thin leaves of wood for day-to-day book-keeping and letters. Dating mostly from the years AD 90-125 (Hadrian's Wall was begun in 122), these unique tablets represent the largest collection of original Roman letters ever found. The book paints a detailed picture of two Roman auxilary regiments, the 9th Cohort of Batavians and the 1st Cohort of Tungrians. Among the 400 named officers and personnel, the Batavian prefect Flavius Cerialis features prominently, together with his wife Sulpicia Lepidina, who received the now famous birthday party invitation from her friend Claudia Severa, wife of Cerialis' colleague and fellow hunting enthusiast Aelius Brocchus. In addition to covering officers and familes, friends and colleagues, this book brings to life the ordinary soldiers and their names and duties; military routine, duty-reports, leave and deserters; the supply of food, drink and other goods; merchants and contractors; visitors and entertainment as well as day-to-day enthusiasms as varied as hunting and religion. This book, by the Chairman of the Vindolanda Trust, not only distils all the recovered material, including many unpublished writing-tablets, but makes full use of the other archaeological evidence. The result is an unparalleled insight into the spirit of the day-today life on the north-west edge of the Empire in the three decades before Hadrian's Wall was built.