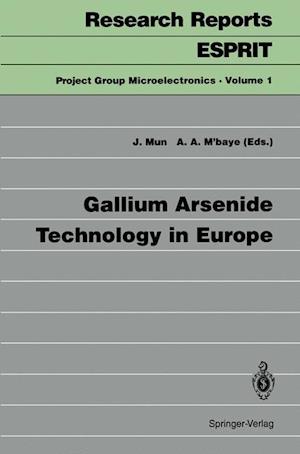 Some of the key milestones in GaAs technology were ftrst demonstrated in Europe, for example, the ftrst GaAs Field Effect Transistor (FET) with microwave performance and the ftrst GaAs Microwave Monolithic Integrated Circuit (MMIC). The strategic nature of GaAs technology has attracted heavy investment from many vertically integrated companies in information technology, communication and defence, as well as from semiconductor manufacturers world wide. Europe always faced strong competition from the USA and Japan and until 1984, European GaAs activities were fragmented amongst various players, with some of the activities loosely grouped into national programmes. In 1984, a number of collaborative projects were established under the European Speciftc Programme on Information Technology (ESPRIT) which crossed national boundaries. It has launched a new and exciting phase for GaAs in Europe and few of those involved at the time could have imagined where such collaboration may lead. In the beginning of those early projects, collaboration was approached with caution and suspicion because after all, many members of a newly formed project team were previously competitors. However, common technology problems soon became apparent and the opportunity to discuss these problems with engineers and scientists from different backgrounds had quickly broken down all barriers. Today, collaboration has become an essential element in European R&D. Collaboration has strengthened the GaAs community and helped to accelerate its growth against difftcult times. This book examines the importance of GaAs technology in Europe and illustrates some of the recent activities pursued under various ESPRIT projects.