Funny How Things Turn Out

- Love, Death and Unsuitable Husbands - a Mother and Daughter story 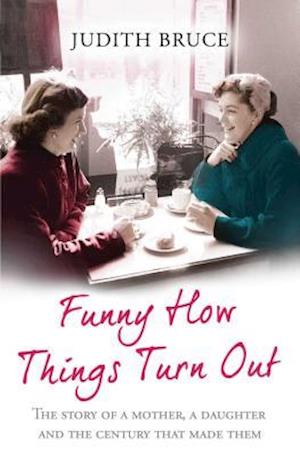 Muriel Newmarch was born in North London in 1903. She died in 2009, aged 106. Judith Bruce is her daughter, and Funny How Things Turn Out- part biography, part memoir - tells the story of both women, which in turn traces the unprecedented changes to women's lives during the 20th Century. The first half of the book chronicles Muriel's world through the Zeppelin raids of WW1, a painfully stilted class system, and marriage and motherhood in the 1930s - then her daughter, Judith, picks up the first-person narrative as a mischievous child in the 1940s and we stay with her until the end of the book. Woven artfully through the episodic chapters are the loves, aspirations and disappointments of two 'ordinary' women. Written with an understated elegance, Judith Bruce brings to life a barely remembered England of satin dresses at Swan & Edgar's, liberty bodices at grammar school, and English summer days where silent fathers mowed the lawn in polished shoes and unsuitable boyfriends smoked Player's Navy Cut. As we move through the post-war years from austerity and to prosperity, and Judith's working life at the BBC, the voice could almost be that of Alan Bennett. Even more so when charting the poignancy of Muriel's fading days, failing body and disappearing memory. A remarkable and accomplished portrait of life, love and changing fortunes.