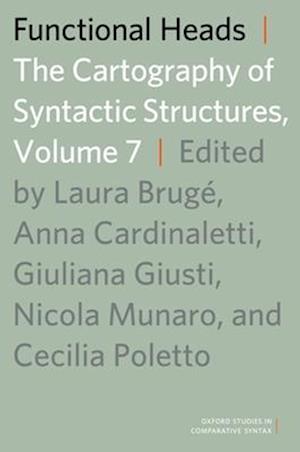 This unique study is the first systematic examination to be undertaken of the high priesthood in ancient Israel, from the earliest local chief priests in the pre-monarchic period down to the Hasmonaean priest-kings in the first century BCE. Deborah Rooke argues that, contrary to received scholarly opinion, the high priesthood was fundamentally a religious office which in and of itself bestowed no civil responsibilities upon its holders, and that not until the time ofthe Maccabean revolt does the high priest appear as the sole figure of leadership for the nation. However, even the Maccabean / Hasmonaean high priesthood was effectively a reversion to the monarchic model of sacral kingship which had existed several centuries earlier in the pre-exilic period,rather than being an extension of the powers of the high priesthood itself. The idea that high priesthood per se bestowed the power to rule should therefore be reconsidered.Ever since Chomsky's Barriers, functional heads have been the privileged object of research in generative linguistics. But over the last two decades, two rival approaches have developed. The cartographic project, as represented by the collections in this Oxford series, considers evidence for a functional head in one language as evidence for it in universal grammar. On the other hand, minimalist accounts tend to consider structural economy as literally involving asfew heads as possible. In the present volume, some of the most influential linguists who have participated in this long-lasting debate offer their recent work in short, self contained case studies. The contributions cover all the main layers of recently studied syntactic structure, including such majorareas of empirical research such as grammaticalization and language change, standard and non-standard varieties, interface issues, and morphosyntax. Functional Heads attempts to map aspects of syntactic structure following the cartographic approach, and in doing so demonstrate that the differences between the cartographic approach and the minimalist approach are more apparent than substantial.