- Why a Stagnant Economy Is a Sign of Success 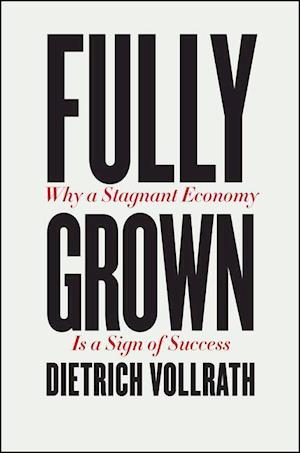 Most economists would agree that a thriving economy is synonymous with GDP growth. The more we produce and consume, the higher our living standard and the more resources available to the public. This means that our current era, in which growth has slowed substantially from its postwar highs, has raised alarm bells. But should it? Is growth actually the best way to measure economic success--and does our slowdown indicate economic problems?

The counterintuitive answer Dietrich Vollrath offers is: No. Looking at the same facts as other economists, he offers a radically different interpretation. Rather than a sign of economic failure, he argues, our current slowdown is, in fact, a sign of our widespread economic success. Our powerful economy has already supplied so much of the necessary stuff of modern life, brought us so much comfort, security, and luxury, that we have turned to new forms of production and consumption that increase our well-being but do not contribute to growth in GDP.

In Fully Grown, Vollrath offers a powerful case to support that argument. He explores a number of important trends in the US economy: including a decrease in the number of workers relative to the population, a shift from a goods-driven economy to a services-driven one, and a decline in geographic mobility. In each case, he shows how their economic effects could be read as a sign of success, even though they each act as a brake of GDP growth. He also reveals what growth measurement can and cannot tell us--which factors are rightly correlated with economic success, which tell us nothing about significant changes in the economy, and which fall into a conspicuously gray area.

Sure to be controversial, Fully Grown will reset the terms of economic debate and help us think anew about what a successful economy looks like.