From Herschel to a Hobnail Boot

- The Life and Times of Larry Munson 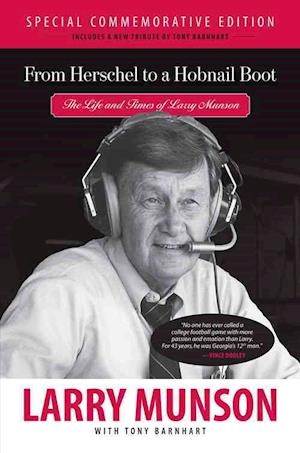 A behind-the-scenes look into the life and career of University of Georgia football broadcaster Larry Munson, From Herschel to a Hobnail Boot tells the story of a legendary announcer and his loyal followers. The autobiography includes an exclusive audio CD of Larry Munson's 10 greatest calls, details on his youth in Minneapolis and his love for the outdoors and musical talents, his broadcasting journey around the country before finally landing in Georgia, and the ups and downs of his four decades as part of the Georgia program. Munson passed away on November 20, 2011, at the age of 89. In this tribute edition, coauthor Tony Barnhart adds a new section that includes several memories and tributes to the legendary Georgia broadcaster. A must-have for fans of the University of Georgia, Larry Munson's story is a remarkable look at an era where the radio voice of college football was king.