From Drag Queens to Leathermen

indgår i serie Studies in Language and Gender 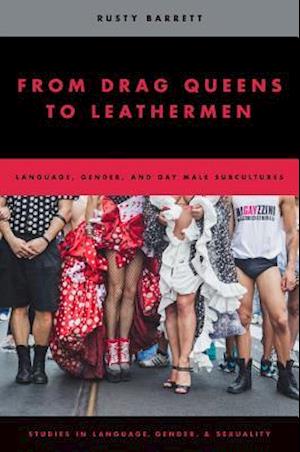 Business is an understudied area in American religious history that has profound implications for how we understand the popularity and ongoing transformation of religion in the US. This volume explores the business aspects of American religious organizations by analyzing the financing, production, marketing, and distribution of religious goods and services and the role of wealth and economic organization in sustaining and even shaping worship, charity, philanthropy,institutional growth and missionary work. Treating religion and business holistically, the essays show how business practices have continually informed American religious life. Laying important groundwork for further investigation, the essays show how American business has operated as a domain forachieving religious purpose that historians of religion often overlook. Even when critics denounce its corruption and fallen state, business occupies a central place in American religious life that merits better understanding. Historically, religion has been more powerful in America when interwoven with business.Chapters on Mormon enterprise, Jewish philanthropy, Hindu gurus, Native American casinos, and the wedding of business wealth to conservative Catholic social teaching indicate the range of new studies stimulated by the business turn in American religious history. Other essays show how evangelicals joined neo-liberal economic practice and right-wing politics to religious fundamentalism to consolidate wealth and power, and develop marketing campaigns and organizational strategies that transformedthe broader parameters of American religious life. All these essays stimulate new ways of thinking about American religious history, and about American success.Some essays in this volume expose the moral compromises religious organizations have made to succeed as centers of wealth and influence, and the religious beliefs that rationalize and justify these compromises. Other essays dwell on the application of business practices as a means of sustaining religious institutions and expanding their reach. Still others take account of controversy over business practices within religious organizations, and the adjustments religious organizations have made inresponse. Together, the essays collected here offer various ways of conceptualizing the interdependence of religion and business in the U.S., establishing multiple paths for further study of their intertwined historical development.Pharmacists constantly face ethical choices - sometimes dramatic matters of life-and-death decisions, but more often subtle, less conspicuous choices that are nonetheless important. Case Studies in Pharmacy Ethics identifies and discusses the broad range of ethics issues pharmacists confront in practice. Ranging from situations faced in direct patient care to broader issues, this book uses cases to explore topics and the ethical framework within whichpractitioners make decisions about such issues as assisted suicide, conscientious refusal, pain management, and confidentiality as well as the equitable distribution of drug resources within institutions or managed care organizations and clinical studies on vulnerable populations.As the scope of the pharmacist's role expands, pharmacists find themselves facing new ethical challenges. This third edition accounts for some of the many changes in pharmacy practice and in the delivery of health care since the second edition. It includes an entirely new chapter on health insurance and health system planning, and a discussion of the impact of the Affordable Care Act and cases that are updated to reflect current pharmacy practice models. It serves as a valuable resourceregarding topics that are both specific to pharmacy practice and those that involve the health care system more generally.This book examines gendered language use in six gay male subcultures: drag queens, radical faeries, bears, circuit boys, barebackers, and leathermen. Within each subculture, unique patterns of language use challenge normative assumptions about gender and sexual identity. Rusty Barrett's analyses of these subcultures emphasize the ways in which gay male constructions of gender are intimately linked to other forms of social difference. In From Drag Queens to Leathermen, Barrett presents an extension of his earlier work among African American drag queens in the 1990s, emphasizing the intersections of race and class in the construction of gender. An analysis of sacred music among radical faeries considers the ways in which expressions of gender are embedded in a broader neo-pagan religious identity. The formation of bear as an identity category (for heavyset and hairy men) in the late 1980s involves the appropriationof linguistic stereotypes of rural Southern masculinity. Among regular attendees of circuit parties, language serves to differentiate gay and straight forms of masculinity. In the early 2000s, barebackers (gay men who eschew condoms) used language to position themselves as rational risk takers with an innatedesire for semen. For participants in the International Mr. Leather contest, a disciplined, militaristic masculinity links expressions of patriotism with BDSM sexual practice.In all of these groups, the construction of gendered identity involves combining linguistic forms that would usually not co-occur. These unexpected combinations serve as the foundation for the emergence of unique subcultural expressions of gay male identity, explicated at length in this book.