From Author to Text 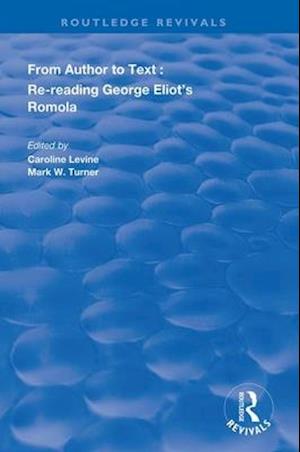 First published in 1998, this volume proposes to shift the critical emphasis from a canonical author to her uncanonical text - from George Eliot to her novel Romola - and contends that this choice both broadens the range of interpretive possibilities and brings them into sharper focus.The editors invited a variety of critics to put their different critical models to work on Romola and the results are fertile and suggestive: among the issues explored here are the domestic politics of marriage, the relationship between narrative and epistemology, the materiality of the text, the novel's relation to nineteenth-century narratives of martyrdom, and the gendering of space. Such theoretical eclecticism, when focused on a common reference point, necessarily opens out into a dialogue among critical and interpretive models. Theory throws light onto Romola, just as Romola throws light onto theory.