From Agent to Spectator

- Witnessing the Aftermath in Ancient Greek Epic and Tragedy 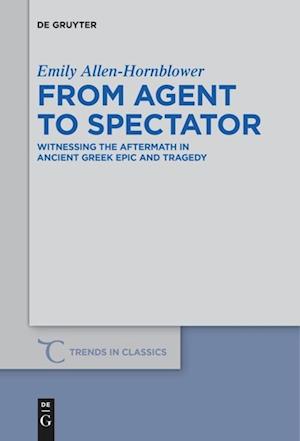 This book looks at witnesses to suffering and death in ancient Greek epic (Homer's Iliad) and tragedy. Internal spectators abound in both genres, and have received due scholarly attention. The present monograph covers new ground by dealing with a specific subset of characters: those who are put in the position of spectator to (and, often, commentator on) their own deed(s). By their very nature, protagonists are confined to the role of witness to the suffering (or deaths) they have caused only for brief stretches of time - often a single scene or even just the length of a speech - but every instance is of central importance, not just to our understanding of the characters in question, but also to the articulation of fundamental themes within the poetic works under examination. As they shift from the status of agent to that of witness, these protagonists, qua spectators to the consequences of their actions, give voice to, dramatize, and enact the tragic motifs of human helplessness and mortal fallibility that lie at the core of Homeric epic and Greek tragedy and that define the human condition, in a manner that leads the audience looking on to ponder their own.