Friends at Waters-edge and Fremont House 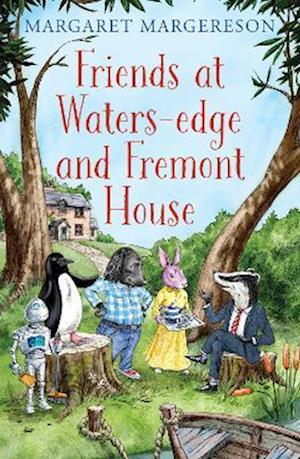 Matthew Weldon has been ill, locked in a coma with visions so intensely real, he wakes up feeling as if he's lived them. There's no reason why - at least no earthly reason. The truth is out there, indeed, and it's that the vulnerable are always the first to be experimented on. However, what our galactic researchers don't count on when they try to implant what are called 'life patterns' to observe how we fare, is just how strong our minds can be... something Matthew discovers when he sits down to write down the adventures he's experienced in the scope of his own mind.The life pattern involved four characters from the animal world, together with an AI robot. All find themselves homeless for different reasons. A rabbit is dumped, unwanted, by the roadside one dark night by the elders of her commune and eventually finds shelter in an empty garden house in the village. She is later joined by the robot, a badger who was a financial adviser with a city bank and who had been made redundant, and a spaniel who escaped one night from a gang he had got involved with. Finally a penguin, who arrived by boat, whose background was never discovered. Together they form a strong friendship, but when they meet a cat who was a city broker, all their lives changed dramatically.But what does it mean for our galactic visitors that Matthew recalls these stories so vividly? More - what does it mean for Matthew himself?

Forfatter
Bibliotekernes beskrivelse The story is one of a life pattern being temporarily implanted in the brain of a sick person, hospitalised and in a coma, by inhabitants of a far off galaxy. Their objective was eventually to take control of vulnerable people on Earth for personal gain. However all did not go to plan.