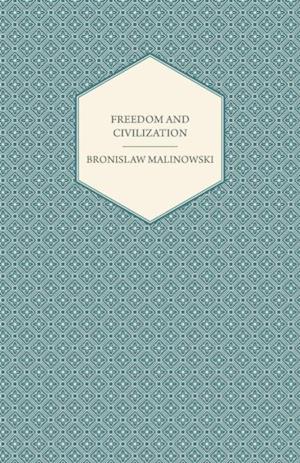 This antiquarian book contains Bronislaw Malinowski's seminal treatise on civilisation and the notion of freedom. During World War Two, Malinowski became more and more obsessed with analysing world issues and the possible consequences of a totalitarian victory. As the war progressed, Malinowski also became preoccupied with the problems of peace and settlement, and was motivated to write this book, the final expression of his basic beliefs and conclusions regarding war, totalitarianism, and the future of humanity. A fascinating and thought-provoking text, this book is recommended for those with an interest in the themes of war and civilisation, and it constitutes a must-have for fans and collectors of Malinowski's work. The chapters of this book include: 'Political Prelude', 'Freedom in Scientific Analysis', 'Freedom in the Birth and Growth of Culture', 'The Meaning of Freedom', 'Analysis of the Multiple Meanings', etcetera. This book is being republished now in an affordable, modern edition, complete with a new prefatory biography of the author.