- Its Syntactic Sources and Diversity 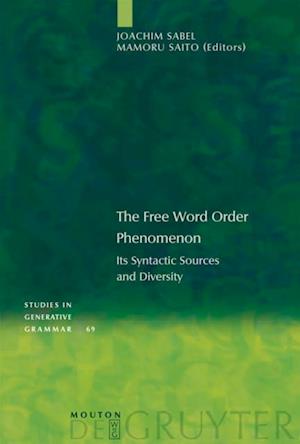 This book deals with the syntax of the free word order phenomenon (scrambling) in a wide range of languages - in particular, German, Japanese, Kannada, Malayalam, Serbo-Croatian, Tagalog, Tongan, and Turkish - in some of which the phenomenon was previously unstudied. In the past, the syntax of free word order phenomena has been studied intensively with respect to its A- and A'-movement properties and in connection with its semantic (undoing) effects. The different articles in this volume offer new ways of analyzing free word order under (i) minimalist assumptions, (ii) concerning the typology of scrambling languages, (iii) with respect to the question of how it is acquired by children, (iv) in connection with its relatedness to information structural factors, and (v) with respect to its consequences for a highly elaborated sentence structure of the IP/VP domain. The articles that focus mainly on the emprical aspects of free word order phenomena deal with the properties and proper analysis of rightwards scrambling in Turkish, with the A-/A'-nature and triggers for VSO-VOS alternations in Tongan, as well as with left-branch extractions and NP-Split in Slavic and its consequences for a typology of scrambling languages. The articles that focus on theoretical aspects of scrambling deal with questions concerning the motivatation of a derivation with scrambling in a free word order language, such as whether scrambling has to be analyzed as topicalization or focus movement. Or assuming that scrambling is feature-driven, how the technical details of this analysis are implemented in the grammar to avoid unwarranted derivations, for example, derivations with string-vacuous scrambling. A further important question that is addressed is when scrambling is acquired in the development of the grammar, and what the consequences are for the timing of the acquisition of A- and A'-movement properties. This volume will be most relevant to researchers and advanced students interested in generative syntax, as well as typologists working on German, Japanese, Slavic, Turkish, Dravidian and Austronesian languages. We regret that due to a layout error the title of Miyagawa's article on 'EPP and semantically vacuous scrambling' is misrepresented in the printed version of the book. You can download the article with the corrected title here.