- The Death of American Journalism and How to Revive It 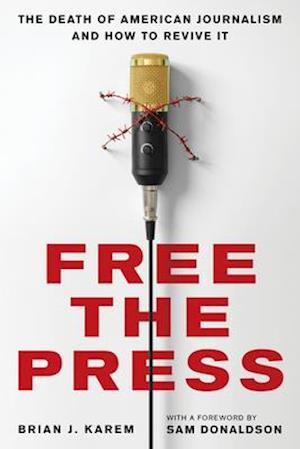 While the phrase "Fake News" may be a recent phenomenon, the relationship between journalists and the politicians they cover has been on a course for disaster for decades. From Richard Nixon's disdain for the press, to Donald Trump's claims that reporters are the "enemy of the people," animosity between press and presidency has reached a fever pitch. In Free The Press, renowned journalist Brian J. Karem asks the question "How did we get here?" And perhaps more importantly, "How do we fix it?"Blending his experiences as a veteran reporter with trenchant analysis of the erosion of trust between the press and the government over the past 40 years, Free The Press gives readers a unique perspective on the challenges facing journalism as well as the rise of hostility between these institutions. While early presidents like Theodore Roosevelt and Dwight Eisenhower enjoyed close relationships with the press, the Vietnam War saw a schism develop that has never fully healed. Since then, each and every president has overseen the withering of relations between the Executive Branch and the so-called Fourth Estate: Ronald Reagan weaponized his partnership with FCC Chairman Mark Fowler to weaken the Fairness Doctrine; George H.W. Bush installed a "pool" system for reporters covering Operation Desert Storm, co-opting and guiding the work of supposedly independent journalists; Bill Clinton's landmark telecommunications act included harmful regulations regarding the internet and allowed for the rise of media conglomerates; George W. Bush's Patriot Act further stifled a suffocating press; Barack Obama's administration repeatedly used the Espionage Act - a relic of the WWI-era - to prosecute officials and whistle-blowers who talked to journalists. All of this leads directly to Donald Trump's most egregious offenses against the media. Readers also see first-hand Karem's own experience in the newspaper industry where he witnessed buyouts and the end of locally owned and operated newspapers, a behind-the-scenes look at his work as a member of the White House Press Corps, and his work defending the confidentiality of sources and advocacy for shield laws to protect the journalistic pillar of anonymity.But it's not all on the government. The press has hurt itself over the years, too. Corporate media has us following the news of the day for clicks and views rather than pursuing long term stories of impact. Reporters have ceased to frame the narrative and failed to co-opt social media contributions until it was too late. Karem concludes with a three-step plan to save the free press, as well as a comprehensive method to reporting in the White House -and elsewhere - for reporters to regain level footing and work towards repairing the damage done to one of the most important and sacred institutional relationships of our country.