Franklin Pierce in Death of a Vice President

indgår i serie Presidents of the Uncanny States of America 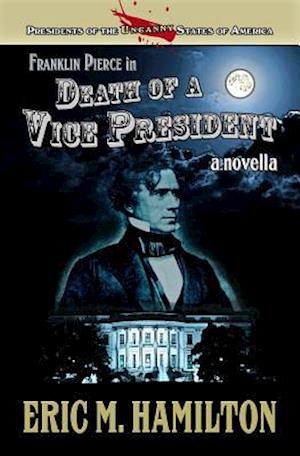 Madness, murder, and mystery permeates throughout this Edgar Allan Poe-inspired thriller!It is early April 1853. Franklin Pierce, the newly elected President of the United States, has suffered the greatest personal tragedy of his life, plunging him into a depression fueled madness. The Vice President, William King, unexpectedly appears at the White House in the middle of the night having overheard details of an international assassination conspiracy that threatens both King and Pierce. Unfortunately, Vice President King is killed without any clue as to who could have done it. Can President Franklin Pierce overcome his personal demons and discover who killed the Vice President before they kill him too?Franklin Pierce in Death of a Vice President is a thrilling psychological horror, starring the president from the 1850's you forgot in 4th Grade. It's an exciting read, and you don't have to be familiar with Franklin Pierce at all to enjoy the story (in fact, it may be a better story if you go in knowing almost nothing). This is perfect for the American history-buff and "normal people" alike!Q&A with the AuthorQ- Franklin Pierce is a really obscure American President. Why did you write an entire story about him?A- Most people don't know, but Franklin Pierce is an incredibly tragic figure, and it's almost a shame that more Americans don't know his story. All of Franklin Pierce's children died while they were all young, and his last surviving child died right before he became President. But also part of what makes Franklin Pierce interesting is that he is so obscure. Most Americans today even know he was a President. From a story-telling perspective, that means I have a completely clean slate to start with. People don't come into the story with any expectations for Pierce as a character, as opposed to some other well-known historical figure like Abraham Lincoln.Q- Where did the idea for this book come from?A- Like most ideas, it came from a variety of places. Specifically, the main plot point and title of the book, comes from the fact that Franklin Pierce's Vice President died only one month after taking office from tuberculosis. The main idea that started the book was- "What if the Vice President didn't die from tuberculosis, but was actually murdered in the White House?" Then elements of Franklin Pierce's tragic story informed the story-writing process.Q- What genre is this book?A- That is a difficult question to answer, because this story straddles a few different genres. First, it's something of historical fiction, or perhaps more accurately 'alternate history.' It takes elements of real history, and then fictionalizes various details. This book could also be described as a psychological thriller. There is a lot of suspense, and most of it comes from Franklin Pierce's own psyche and his own battle with his personal demons that are affecting his sanity. In that way, it could also be described as a gothic horror, which is a genre reminiscent of works such as Edgar Allan Poe, where focus is on the horror of losing one's mind. Poe was an American writer of the nineteenth century, and it seemed very appropriate to draw inspiration from Poe in writing this story that involves a lot of his themes.Q- What if you don't know anything about Franklin Pierce or American history? Can you still enjoy this book?A- YES! This book was written with the expectation that the reader does not know anything about Franklin Pierce from the start. You don't need to know much in terms of American history, either, to be able to follow and enjoy this book. But, if you do happen to be an American history-buff, there are several little tidbits that make the story all that much more enjoyable.