- Debates on a Multi-Faceted Concept in Gender Studies

indgår i serie The Feminist Imagination - Europe and Beyond 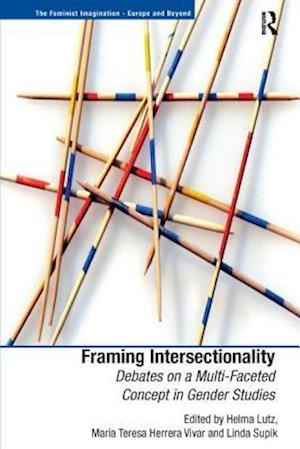 Originally conceived by Kimberle Crenshaw in 1989 as a tool for the analysis of the ways in which different forms of social inequality, oppression and discrimination interact and overlap in multidimensional ways, the concept of 'intersectionality' has attracted much attention in international feminist debates over the last decade. Framing Intersectionality brings together proponents and critics of the concept, to discuss the 'state of the art' with those that have been influential in the debates that surround it. Engaging with the historical roots of intersectionality in the US-based 'race-class-gender' debate, this book also considers the European adoption of this concept in different national contexts, to explore issues such as migration, identity, media coverage of sexual violence against men and transnational livelihoods of high and low skilled migrants. Thematically arranged around the themes of the transatlantic migration of intersectionality, the development of intersectionality as a theory, men's studies and masculinities, and the body and embodiment, this book draws on empirical case studies as well as theoretical deliberations to investigate the capacity and the sustainability of the concept and shed light on the current state of intersectionality research. Presenting the latest work from a team of leading feminist scholars from the US and Europe, Framing Intersectionality will be of interest to all those with interests in gender, women's studies, masculinity, inequalities and feminist thought.

Forfattere
Bibliotekernes beskrivelse The concept of 'intersectionality' has attracted much attention in international feminist debates over the last decade. This title brings together proponents and critics of the concept, to discuss the advances with those that have been influential in the debates that surround it.