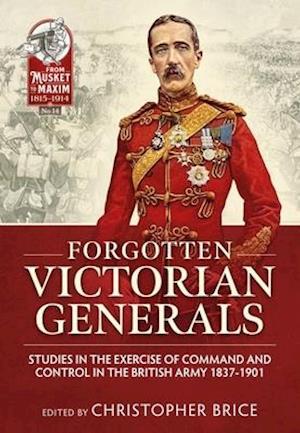 Many of the British Army's actions during the Victorian Era are forgotten, misunderstood and misrepresented. Stereotypes of the Victorian officer, soldier and battlefield abound. As the latter half of the twentieth century was one of 'Imperial Guilt' it is perhaps unsurprising that many of the 'heroes' of the age have been forgotten. This is particularly true of the 'Generals'. They were lauded in their day but now are unknown. Yet there were many capable individuals exercising high office. This new work provides some examples of the many interesting and talented officers who exercised command during the Victorian Era. It is hoped that such a work will be of interest to both the casual reader and the student of military history. Much of the military history of this age has been unfairly ignored, and there are many powerful and important lessons to be learnt from the careers of the men included in this book. The Generals featured in this book represent different types of General. Field Marshal Sir George White was Commander in Chief in India from 1893 to 1898 and was a rising star of the Army. Yet his reputation suffered from the South African War and his decision to take refuge in Ladysmith and become sieged during the early part of the war. Field Marshal Robert Napier was also Commander-in-Chief India from 1870 to 1876. He was originally an officer of engineers in the East India Company Army. He was considered one of the finest civil engineers in India and developed a reputation as a fine battlefield commander, culminating in his successfully conducting the Abyssinia Campaign of 1867-68. Brigadier General Robert Loyd-Lindsay's success lay in the political arena more than the military. He did much in the name of military reform and worked hard for the medical support of soldiers. General Sir Archibald Allison was very much the fighting soldier in his younger days, but in later life proved a successful Commandant at Sandhurst and Head of the Intelligence Branch at the War Office. Field Marshal William Nicholson had an interesting campaigning career and had the distinction of being the Second Chief of the General Staff of the British Army and was credited with much success in reforming the army. General Sir William Lockhart was yet another Commander-in-Chief in India who had seen considerable active service including commanding the Tirah Expedition of 1897-1898. General Sir Henry Brackenbury saw considerable active service but his greatest contributions were behind the scenes. He was the greatest administrator in the British Army during the Victorian Era. Major-General Sir John Ardagh had served under Brackenbury in the Intelligence Branch and later became its leader. Ardagh was also a first rate administrator and did an excellent job in the Intelligence Branch. Although criticised during the South African War for a perceived failure of military intelligence he was exonerated by the Royal Commission set up after the war. General Sir Arthur Cunynghame was an officer of the old school. He perhaps deserves more credit than he gets and certainly provides for an interesting study. All in all the Generals featured in this book provides us with a very interesting insight into generals of this era and the way in which they exercised command. The authors are a collection of experienced and early career historians.

Forfattere
Bibliotekernes beskrivelse Addressing a historical period so far mostly ignored, this new work provides some examples of the many interesting and talented officers who exercised command during the Victorian Era.