For Town and Country 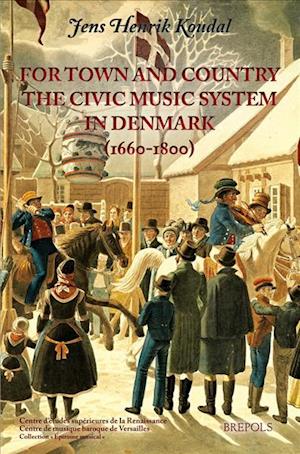 The employment of civic musicians was a practice in most European countries in early modern Europe, all the way from London and Venice to small Danish towns. This study's objective is to lay out which kinds of civic musicians (stadsmusikanter) Denmark had, and to examine what that came to signify for musicians and music, as there has not been a study in depth of civic musicians' employment in Denmark until now. It has been a particular objective of this study to illuminate the Danish situation in relation to some other European countries. Compared to Germany, the civic music system in the kingdom of Denmark developed some clear characteristics in the period 1660-1800 because it had to fulfil the requirements of both the absolute monarchy and the municipal authorities. It is particularly interesting that the system was regulated by royal licenses which applied across both towns and the countryside. The book's first main section goes through the background to the absolute monarchy's civic music system, including the conditions of employment. The second main section shows what the social consequences of the Danish system were for both licensed and unlicensed musicians. The third section is about the instruments and the music. We find examples of the entire repertoire of the Danish civic musicians, from ambitious artistic ensemble music to virtuoso solo sonatas with continuo and single part music for everyday use. The civic musicians exercised a marked influence on the unlicensed players in villages. One can speak of a cultural battle between the professional civic musicians' music and the traditions of the country fiddlers. Civic musicians in Denmark had international contacts with colleagues and played a prolific role as promoters of music.