- Early Modern Dietaries and the Plays 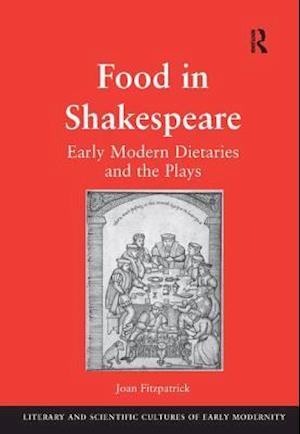 A study of common and exotic food in Shakespeare's plays, this is the first book to explore early modern English dietary literature to understand better the significance of food in Shakespearean drama. Food in Shakespeare provides for modern readers and audiences an historically accurate account of the range of, and conflicts between, contemporary ideas that informed the representations of food in the plays. It also focuses on the social and moral implications of familiar and strange foodstuff in Shakespeare's works. This new approach provides substantial fresh readings of Hamlet, Macbeth, As you Like It, The Winter's Tale, Henry IV Parts 1 and 2, Henry V, Titus Andronicus, Coriolanus, Pericles, Timon of Athens, and the co-authored Sir Thomas More. Among the dietaries explored are Andrew Boorde's A Compendyous Regyment or a Dyetary of Healthe (1547), William Bullein's The Gouernement of Healthe (1595), Thomas Elyot's The Castle of Helthe (1595) and Thomas Cogan's The Hauen of Health (1636). These dieteries were republished several times in the early modern period; together they typify the genre's condemnation of surfeit and the tendency to blame human disease on feeding practices. This study directs scholarly attention to the importance of early modern dietaries, analyzing their role in wider culture as well as their intersection with dramatic art. In the dietaries food and drink are indices of one's position in relation to complex ideas about rank, nationality, and spiritual well-being; careful consumption might correct moral as well as physical shortcomings. The dietaries are an eclectic genre: some contain recipes for the reader to try, others give tips on more general lifestyle choices, but all offer advice on how to maintain good health via diet. Although some are more stern and humourless than others, the overwhelming impression is that of food as an ally in the battle against disease and ill-health as well as a potential enemy.