- The Complete Illustrated History - What Dreams Are Made Of 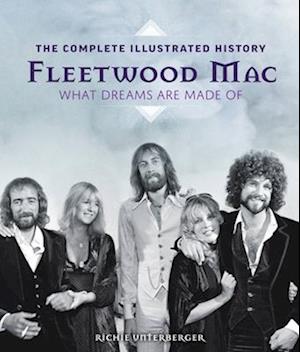 This is the complete, illustrated history of Fleetwood Mac, the legendary band that has sold more than 100 million records worldwide. From this British-American band's blues origins in the 1960s to its pop superstardom in the 1970s and 1980s to its 2015 reunion, Fleetwood Mac has endeared itself to audiences worldwide. Fleetwood Mac: The Complete Illustrated Historycovers the band's illustrious career through a carefully researched text and myriad photographs and memorabilia, including some rare and little-seen items. Spanning the band's 50+ years and seventeen studio albums, this roller-coaster history highlights details that will surprise even the most loyal fans. The band's most popular lineup includes drummer Mick Fleetwood, bassist John McVie, keyboardist and vocalist Christine McVie, guitarist and vocalist Lindsey Buckingham, and singer Stevie Nicks, but its members have shifted over the years since Fleetwood Mac began in 1967. And although the band's superstar phase in the 1970s is most familiar to the public, Fleetwood Mac's roots were in the blues, and the band evolved in fits and starts before finding popular success. Fleetwood Mac: The Complete Illustrated History documents their entire story, including the troubled circumstances that led to the 1970 withdrawal of the band's original guitarist, Peter Green, as well as the broken marriage of John and Christine McVie and the romantic breakup of Stevie Nicks and Lindsey Buckingham that threatened to split the group--all to be followed by one of the biggest albums of all time, Rumours, which featured such enduring hits as "Dreams," "Don't Stop," and "Go Your Own Way." This is the whole story of one of rock and roll's greatest bands--required reading for fans.