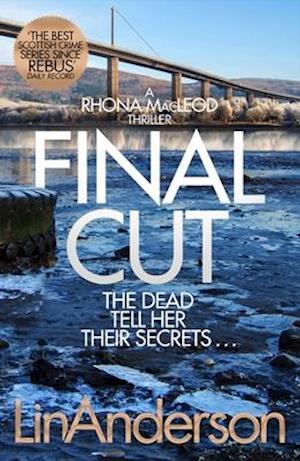 A terrifying serial killer is on the loose in Final Cut, the sixth novel in Lin Anderson's forensic crime series featuring Rhona MacLeod.When Claire regains consciousness after a stranger causes her car to crash in a snowstorm, she is frantic to discover that her nine-year-old daughter Emma is missing from the back seat. Then Emma is found in the woods nearby, unharmed but cradling a child's skull. She claims it 'called' to her - and she can hear another voice nearby . . .Meanwhile, forensic scientist Rhona MacLeod is trying to discover the identity of a corpse found badly burnt in a skip. The body is wearing a soldier's ID tag, but DNA tests show it's not him. When DS Michael McNab asks for her help identifying the remains Emma found, they discover the two cases are linked in ways they could never have imagined . . .

Forfattere
Bibliotekernes beskrivelse Forensic Scientist Rhona MacLeod is called in to investigate when a badly burned body is found in a skip.