Fiends of the Eastern Front 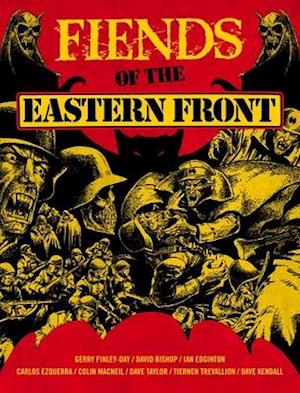 A luxury omnibus of classic supernatural war stories from the Golden Age of comics - expanded and updated in definitive edition.Buried deep underground are the remains of Wehrmacht soldier, Hans Schmitt, and his diary, which journals his eerie encounter with the Romanian Captain Constanta and his platoon of blood-sucking freaks! Back in 1943, with the Russians willing to fight until their last man in order to defend Stalingrad, Panzergrenadier Richter discovers Constanta's secret and learns than sometimes your allies can be just as dangerous as the enemy!Featuring the breathtaking art of Carlos Ezquerra (Judge Dredd) and Colin MacNeil (America, Chopper: Song of the Surfer), with stories from Gerry Finley Day (Rogue Trooper), David Bishop (Thrill-Power Overload), and recent classics from Ian Edginton (Stickleback, Scarlet Traces), Dave Kendall (Fall of Deadworld).