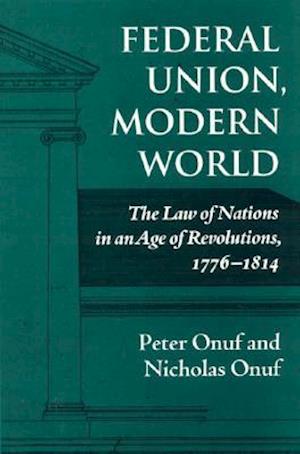 In this thought-provoking analysis of international relations, the Onufs deepen our understanding of the law of nations in a world of profound change. Federal Union, Modern World relates the emergence of the modern concept of state-societies to the remarkable experiments in constitution-making in the United States and shows how efforts to model a federal union in America influenced the broader relations of European nation-states. Relying on ancient and early modern sources prominent in the minds of the Founders, the authors show how the idea of a federal union was applied to the nations of the world. This profound conceptual change in international relations sundered the law of nations from naturalism and grafted it into modern ideas of liberalism. The formation of the United States as federation, argue the Onufs, "expressed Enlightenment impulses . . . more fully than any contemporaneous developments in Europe." Furthermore, as the Founders attempted to secure a tenable position for their creation, they inspired a shift in international relations theory from natural legal doctrine to the positive law of states. This timely study of international union and disunion informs us as much about the decades of revolution as it does about the context of international relations in our own time.