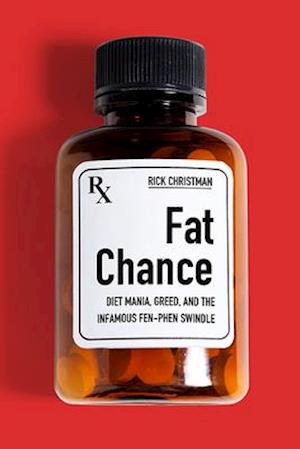 During the early 1990s, the diet drugs fen-phen and Redux achieved tremendous popularity. The chemical combination was discovered by chance, marketed with hyperbole, and prescribed to millions. But as the drugs' developer, pharmaceutical giant American Home Products, cashed in on the miracle weight-loss pills, medical researchers revealed that the drugs caused heart valve disease. This scandal was, incredibly, only the beginning of an unbelievable saga of greed.

In Fat Chance, Rick Christman recounts a story that a judicial tribunal later described as "a tale worthy of the pen of Charles Dickens." Bill Gallion, Shirley Cunningham, and Melbourne Mills contrived to bring a class-action lawsuit against American Home Products in Covington, Kentucky. Their hired trial consultant, Mark Modlin, had a bizarre relationship with the presiding judge, Jay Bamberger of Covington, who was once honored as the Kentucky Bar Association's "Judge of the Year." Soon after, Stan Chesley, arguably the most successful trial attorney in the United States, joined the class-action suit. Ultimately, their efforts were rewarded with $200 million for the 431 plaintiffs, and the four lawyers immediately began to plunder their clients' money. When the fraud was discovered, two of the attorneys received long prison sentences and another was acquitted after claiming an alcoholism defense. All four were permanently banished from the practice of law and Judge Bamberger was disbarred and disrobed.

Recounting a dramatic affair that bears conspicuous similarities to opioid-related class-action litigation against the pharmaceutical industry, Christman offers an engaging, if occasionally horrifying, account of one of America's most prominent product liability cases and the settlement's aftermath.