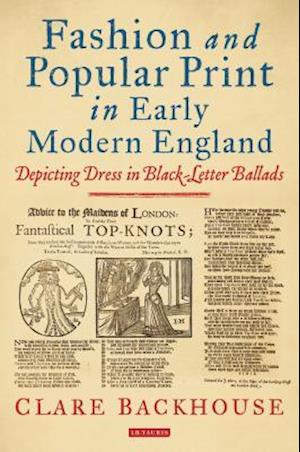 Fashion featured in black-letter broadside ballads over a hundred years before fashion magazines appeared in England. In the seventeenth century, these single-sheet prints contained rhyming song texts and woodcut pictures, accessible to almost everyone in the country. Dress was a popular subject for ballads, as well as being a commodity with close material and cultural connections to them.This book analyses how the distinctive words and images of these ballads made meaning, both in relation to each other on the ballad sheet and in response to contemporary national events, sumptuary legislation, religious practice, economic theory, the visual arts and literature. In this context, Clare Backhouse argues, seventeenth-century ballads increasingly celebrated the proliferation of print and fashionable dress, envisioning new roles for men and women in terms of fashion consumption and its importance to national prosperity. The book demonstrates how the hitherto overlooked but extensive source material that these ballads offer can enrich the histories of dress, art and culture in early modern England.