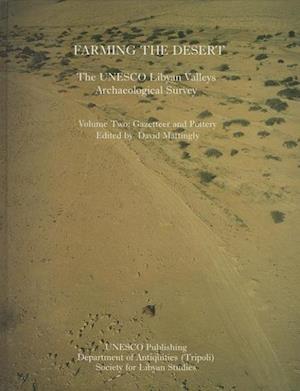 "The desert margins of North Africa are extremely rich in archaeological ruins of the Roman period, evidence of dense settlement 2,000 years ago in what are now arid and hostile environments. Historians, geographers and archaeologists have long debated the significance of these sites, explaining the 'Greening of the Desert' variously in terms of environmental change, colonization, external market forces or combinations of factors. The debate so far has been characterized by the lack of scientific data from any one region concerning, on the one hand, the nature of settlement, society and land-use and, on the other, the contemporary climate and environment; this has made it impossible to compare rigorously the strengths and weaknesses of the alternative theories.The two volumes of Farming the Desert present the results of the alternative approach taken by the UNESCO Libyan Valleys Archaeological Survey: a detailed inter-disciplinary study by archaeologists, geographers and historians of a single region, i.e. the basins of the Wadis Sofeggin and ZemZem in Tripolitania, northwest Libya. The project's methodologies for studying the archaeology of arid-zone agriculture have been recognized internationally, and the results of their application to the study area have transformed our understanding of how the desert margins of North Africa were farmed in antiquity, with important implications for modern agricultural planning.'A particular triumph. It marshals a wide variety of skills and techniques, transforms our understanding of ancient pre-desert farming, and is as vital a contribution to modern needs as it is to scholarship.' (Tim Potter, British Museum)