False Alarm: How Climate Change Panic Costs Us Trillions, Hurts the Poor, and Fails to Fix the Planet (HB)

- How Climate Change Panic Costs Us Trillions, Hurts the Poor, and Fails to Fix the Planet 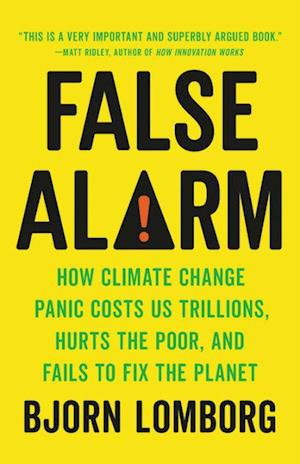 With hurricanes battering coast lines, sea level rise threatening entire countries with extinction and wildfires raging across broad swaths of America and the planet, it is hardly surprising that countering global warming has become a top priority for the developing world. In ten years, we have gone from arguing about whether climate change is real to wagering on how soon it will actually extinguish planet Earth. Children panic about their future, and adults wonder if it is even ethical to bring new life into the world. Enough, argues political scientist and bestselling author Bjørn Lomborg. Climate change, while real, is not the apocalyptic threat that we've been told it is. There is no scientific evidence, for instance, that the world is suffering from more droughts, wildfires, or hurricanes than ever before. In fact, global death due the natural disaster is at an all-time low. But the costs of natural disasters are rising, even though their incidence isn't - contributing to the impression that the world has become a far more dangerous place. Climate panic is based on bad science, and generates even worse policy. Around the world, we are currently spending about $500 billion annually on environmental issues and, with the many promises of zero carbon emissions soon, those costs could escalate to $10-20 trillion annually. But these policies are not paying dividends in terms of solving global warming. The money that goes to fund environmental initiatives crowds out other measures that could have a far more dramatic impact on human well-being, particularly in the developing world: by focusing on issues like immunization, education, birth control, and nutrition, we could increase GDP at a vastly higher rate than climate change threatens to lower it. Measured and data-driven, False Alarm will convince you that almost everything you think about climate change is wrong - and points the way towards making the world a vastly better, if slightly warmer, world for all.