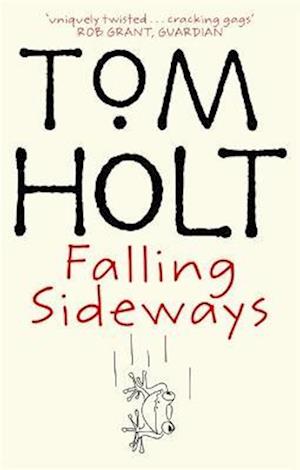 '... Hitchhiker's Guide aficionados will relish every line.' - Publishers Weekly'Holt has a touch that is equally breezy and serious: the story's twists and revelations feel like Douglas Adams emulating David Mamet.' - Publishers WeeklyFrom the moment the first Homo Sapiens descended from the trees, possibly onto their heads, humanity has striven towards civilisation. Fire. The Wheel. Running Away from furry things with more teeth than one might reasonably expect - all are testament to man's ultimate ascendancy.It is a noble story, a triumph of intelligence over adversity and so, of course, complete and utter fiction. For one man has discovered the hideous truth: that humanity's ascent has been ruthlessly guided by a small gang of devious frogs.Books by Tom Holt: Walled Orchard Series Goatsong The Walled Orchard J.W. Wells & Co. Series The Portable Door In Your Dreams Earth, Air, Fire and Custard You Don't Have to Be Evil to Work Here, But It Helps The Better Mousetrap May Contain Traces of Magic Life, Liberty and the Pursuit of Sausages YouSpace Series Doughnut When It's A Jar The Outsorcerer's Apprentice The Good, the Bad and the Smug Novels Expecting Someone Taller Who's Afraid of Beowulf Flying Dutch Ye Gods! Overtime Here Comes the Sun Grailblazers Faust Among Equals Odds and Gods Djinn Rummy My Hero Paint your Dragon Open Sesame Wish you Were Here Alexander at World's End Only Human Snow White and the Seven Samurai Olympiad Valhalla Nothing But Blue Skies Falling SidewaysLittle PeopleSong for NeroMeadowlandBarkingBlonde BombshellThe Management Style of the Supreme BeingsAn Orc on the Wild Side

Forfattere
Bibliotekernes beskrivelse A hilarious comic fantasy novel from the most inventive writer in the field.