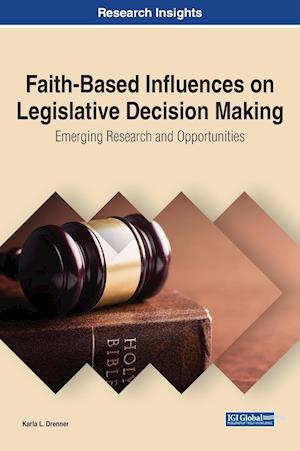 In recent years, state legislatures in the United States have been transformed based on the social identities of their membership. At its most fundamental level, the debate over LGBTQ rights always has been a debate over the right of LGBTQ people to exist. While the role faith plays in legislative decision making is rooted within government functions, careful examination and change must be conducted to protect the humanity of those at risk through these influences. Faith-Based Influences on Legislative Decision Making: Emerging Research and Opportunities explores the balance between religious freedoms of legislators and the human rights of members of the LGBTQ community. Examining the politics and institutional forces brought to bear on LGBTQ claims for visibility, recognition, and dignity, this book is organized into three sections, each of which uses a distinct institutional lens-historical, legal, and religious. The author attempts to demonstrate that while the clash of cultures between these groups is real, it is not simple. The faith worldviews of each share common structural features but often reach extremely different conclusions. Covering topics such as marriage equality, religious liberty, and court cases, this book is an essential resource for students and educators in political science, policymakers, legislators, historians, sociologists, researchers, universities, administrations, community leaders, and academicians.