- A Story about Telling the Truth 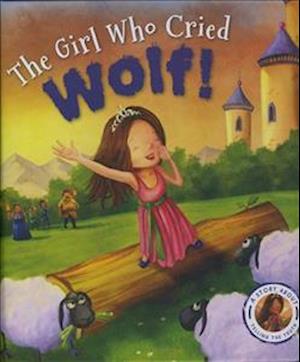 In The Girl Who Cried Wolf, we meet the demanding Princess Arabella, who declares she is bored of living in the castle. She decides to swap roles with Tom, the lowly shepherd boy, as she thinks his job seems much more fun. A shocked Tom is sent off to the castle, whilst Arabella looks after the sheep. However, it isn't long before she is bored of this job too, and decides to play a trick on the townsfolk. "WOLF, WOLF!" she cries, sending the panicked villagers up the hill - only to find there is no wolf. Arabella, still giggling, then cries, "TROLL, TROLL!". Again, the townsfolk rush up the hill to her rescue, huffing and puffing - only to find there is no troll. They begin to distrust her, and a frustrated Tom watches from his bedroom window. When Arabella cries 'wolf' for a third time, the villagers decide to pay the new 'prince' Tom a visit. Tom tells the villagers not to rush to Arabella's aid the next time she calls for help, as she has been lying. Within minutes the cry of "DRAGON, DRAGON!" comes from Arabella, but this time the townsfolk ignore her. Tom however, happens to see that this time, Arabella really is telling the truth! He bravely rushes up the hill and throws a bucket of water in the dragon's face, scaring it away. A terrified Arabella realises how foolish she had been before, and vows to never tell a lie again. She and Tom swap back to their original jobs, and calm is restored.

Forfattere
Bibliotekernes beskrivelse The perfect way to broach sensitive issues with young children, this re-worked fairytale include relatable characters and scenarios, and further points for discussion.