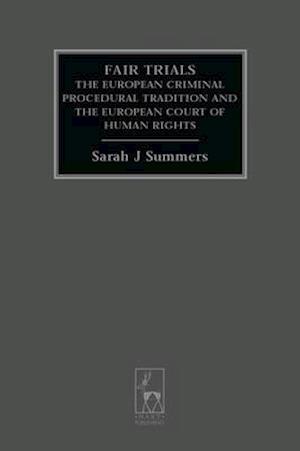 The right to a fair trial has become an issue of increasing public concern, following a series of high profile cases such as the Bulger case, Khan (Sultan) and R v DPP ex p Kebilene. In determining the scope of the right, we now increasingly look to the ECHR, but the court has given little guidance, focusing on reconciling procedural rules rather than addressing the broader issues. This book addresses the issue of the meaning of the right by examining the contemporary jurisprudence in the light of a body of historical literature which discusses criminal procedure in a European context. It argues that there is in fact a European criminal procedural tradition which has been neglected in contemporary discussions, and that an understanding of this tradition might illuminate the discussion of fair trial in the contemporary jurisprudence. This challenging new work elucidates the meaning of the fair trial and in doing so challenges the conventional approach to the analysis of criminal procedure as based on the distinction between adversarial and inquisitorial procedural systems. The book is divided into two parts.The first part is dominated by an examination of the fair trial principles in the works of several notable European jurists of the nineteenth century, arguing that their writings were instrumental in the development of the principles underlying the modern conception of criminal proceedings. The second part looks at the fair trials jurisprudence of the ECHR and it is suggested that although the Court has neglected the European tradition, the jurisprudence has nevertheless been influenced, albeit unconsciously, by the institutional principles developed in the nineteenth century.