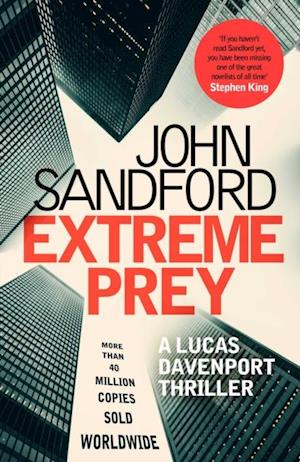 **Dont miss John Sandfords brand-new thrillerMasked Prey, available now**A Lucas Davenport thriller by internationally bestselling novelist John Sandford After the events inGathering Prey, Lucas Davenport finds himself in a very unusual situationno longer employed by the Minnesota BCA. His friend the governor is just cranking up a presidential campaign, though, and he invites Lucas to come along as part of his campaign staff. ';Should be fun!' he says, and it kind of isuntil they find they have a shadow: an armed man intent on killing the governor . . . and anyone who gets in the way.***READERS LOVE THE PREY SERIES*** John Sandford knows all there is to know about detonating the gut-level shocks of a good thrillerThe New York Times Book Review? Thebest Lucas Davenport storyso far. The man has a fine touch for outlaws Stephen King onGolden Prey Sandford's trademark blend ofrough humor and deadly action keepsthe pages turning until the smile-inducing wrap-up, which reveals the fates of a number of his quirky, memorable charactersPublishers WeeklyonGolden Prey It appears there is no limit to John Sandford's ability to keep new breath and blood flowing into his Lucas Davenport series. This isa series you must be readingif you are not already Bookreporter.com Sandford has always been atthe top of any list of great mystery writers. His writing and the appeal of his lead character are as fresh as everThe Huffington Post Sandford isconsistently brilliantClevelandPlain Dealer