- The Postwar Transformation of European Business 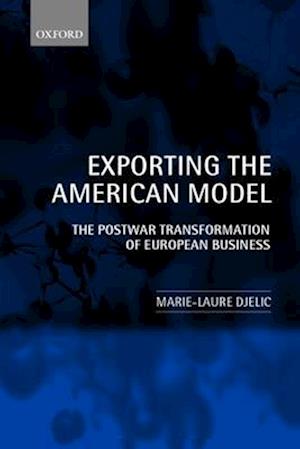 Exporting the American Model places in historical perspective the apparently universal appeal of the model of corporate capitalism. Marie-Laure Djelic explores the patterns of evolution that have characterized Western European business systems in the postwar period. She identifies two seemingly conflicting trends - one leading to convergence, the other perpetuating national differentiation. To account for this apparent contradiction, she first documents the large-scale transfer to Western Eruope of a model of corporate capitalism with clear American origins, showing the key role in the process of the Marshall Plan administration. Focusing on France, West Germany, and Italy, she then looks at the specific conditions in which the transfer took place in each case. One key finding is that this transfer had varying degrees of success in each of the three countries and that the American model was partially adapted to national conditions when it was not strongly resisted. The book underscores the socially constructed and historically contingent nature of structural arrangements shaping conditions of industiral production in capitalist countries today.National systems of industrial production are not given or necessary; they are constructed through time by economic but also political actors with particular goals and resources, often in direct confrontation with other intersts. This shaping is embedded within specific national institutional contexts but it also takes place in unique geopolitical conditions. Thus foreign actors, it is argued, can have in certain circumstances a significant impact on the process of definition of a given national system of industial production.

Forfattere
Bibliotekernes beskrivelse Explores trends in the evolution of business systems in post-war Western Europe, looking particularly at the influence of the American corporate model. The author focuses on France, West Germany and Italy after 1945 and the Marshall Plan, arguing that the model had varying degrees of success in these three countries. numerous figures and tablesPRIZES:Winner of Winner of the 2000 Max Weber Award (Organizations, Occupations, and Work), American Sociological Association.