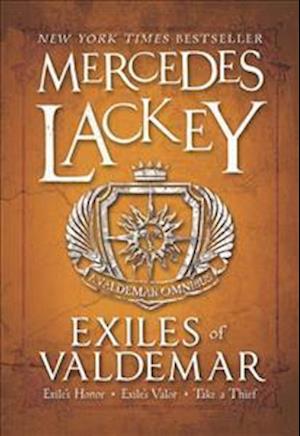 New York Times #1 bestseller Mercedes Lackey's epic Valdemar series continues in this collection of three novels set in the classic fantasy universe. Exiles of Valdemar tells the story of Alberich, the youngest captain in the army of Karse.Alberich spent most of his youth training in the Karsite military schools. As the son of an impoverished mother, he had no other career choice open to him, so he studied hard and pushed himself ruthlessly, rising in the ranks with speed. When he became one of Karse's youngest captains, he received a gift of a powerful white stallion liberated from the enemy.But the Sunpriests watch for those exhibiting demon powers, the sixth sense for battle that Alberich is clearly able to wield. When they try to burn him as a witch, he escapes to enemy territory: Valdemar. There, he will struggle to remain true to his people while helping to train the direst enemy of Karse. When he meets Queen Selenay, will he be able to protect her from the dangers of her own heart?Exiles of Valdemar not only follows the adventures of the prickly weaponsmaster Alberich, but also includes the untold story of Skif, a popular character from Lackey's first novel.