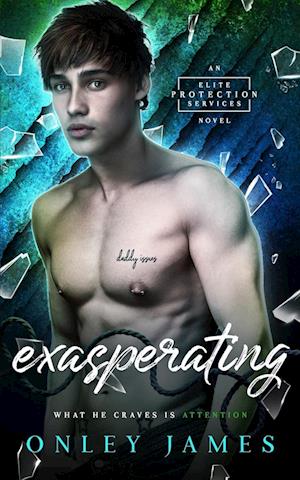 What he craves is attention.

CALDER SETON is an unapologetic manwhore. Former Texas Ranger turned private security agent for Elite, he's an expert at keeping his heart to himself. His employer wishes he'd do the same for his body. Calder has a habit of sleeping with Elite's clients and they've told him to keep it in his pants or find a new job. That's fine with Calder. He has a new playmate anyway, virginal actor Robby Shaw.

ROBBY SHAW spent most of his life sheltered from the world until he lands a role in an LA kid's show and becomes the fake boyfriend of A-list actor, Elijah Dunne. When that relationship ends in humiliation and heartache, Robby meltdowns epically, landing him in county lockup and on the radar of Calder Seton, who he hasn't seen in over a month.

A sizzling hookup leaves both Robby and Calder questioning their life choices, and when Robby's life is threatened, Calder doesn't hesitate to step in, free of charge. Unfortunately, Robby hires Elite before he can volunteer, putting himself on Calder's list of untouchables until they can solve a murder.

The rules of Romancelandia state only a virgin can tame a manwhore, but both Robby and Calder have a pile of baggage and everything from a cult to anonymous killers standing in their way. Can they find a way to heal from their pasts so they can have a future?

EXASPERATING is the third book in the Elite Protection Services Series and contains age-gap, high-heat romance with an HEA and no cliffhangers.