Everyone You Hate Is Going to Die

- And Other Comforting Thoughts on Family, Friends, Sex, Love, and More Things That Ruin Your Life 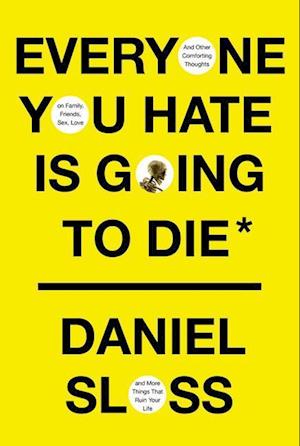 From one of the hottest young comedians at work today--two Netflix specials, a world tour, a brand new HBO special, and a well-earned reputation as mind-bogglingly funny and hilariously offensive and challenging--a book about his favorite subject . . . and you will never think about relationships in the same way again. Daniel Sloss's comedy engages, enrages, offends, makes people uncomfortable, provides solace, and gets everyone roaring with laughter--all at the same time. Dark, his first Netflix comedy special, is a brilliant, somehow laugh-out loud funny meditation on our relationship with death. Jigsaw, his second Netflix special, needles apart the ideas of love, romantic relationships, and marriage--and according to Sloss has caused 120 divorces and some 50,000 break-ups (and he's got the Tweets to back up those numbers). Now, in his first book, he picks up where Jigsaw left off, and goes after every conceivable kind of relationship between two people--with one's country (Daniel's is Scotland), with America, with lovers, ex-lovers, ex-lovers who you hate, ex-lovers who hate you, parents, best friends (male and female), not-best friends, children, and siblings. Every relationship gets the full, inimitable Sloss treatment as he explains why each one is fragile and ridiculous and awful--but, just maybe, also valuable and meaningful. In any case, one way or the other, under his pen, they are all hilarious.