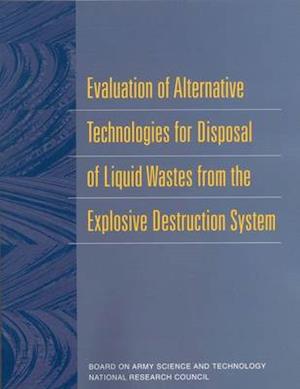 Chemical warfare materiel (CWM) encompasses diverse items that were used during 60 years of efforts by the United States to develop a capability for conducting chemical warfare. Non-Stockpile CWM (NSCWM) is materiel not included in the current U.S. inventory of chemical munitions and includes buried materiel, recovered materiel, components of binary chemical weapons, former production facilities, and miscellaneous materiel. Because NSCWM is stored or buried at many locations, the Army is developing transportable treatment systems that can be moved from site to site as needed. Originally, the Army planned to develop three transportable treatment systems for nonstockpile chemical materiel: the rapid response system (RRS), the munitions management device (MMD), and the explosive destruction system (EDS). This report supplements an earlier report that evaluated eight alternative technologies for destruction of the liquid waste streams from two of the U.S. Armya (TM)s transportable treatment systems for nonstockpile chemical materiel: the RRS and the MMD.This report evaluates the same technologies for the destruction of liquid waste streams produced by the EDS and discusses the regulatory approval issues and obstacles for the combined use of the EDS and the alternative technologies that treat the EDS secondary waste streams. Although it focuses on the destruction of EDS neutralent, it also takes into consideration the ability of posttreatment technologies to process the more dilute water rinses that are used in the EDS following treatment with a reagent.