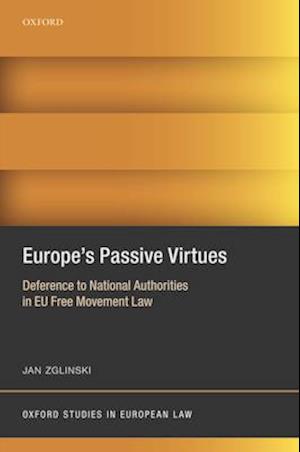 The European Court of Justice has been celebrated as a central force in the creation and deepening of the EU internal market. Yet, it has also been criticized for engaging in judicial activism, restricting national regulatory autonomy, and taking away the powers of Member State institutions. In recent years, the Court appears to afford greater deference to domestic actors in free movement cases. Europe's Passive Virtues explores the scope of and reasons for thisphenomenon. It enquires into the decision-making latitude given to the Member States through two doctrines: the margin of appreciation and decentralized judicial review.At the heart of the book lies an original empirical study of the European Court's free movement jurisprudence from 1974 to 2013. The analysis examines how frequently and under which circumstances the Court defers to national authorities. The results suggest that free movement law has substantially changed over the past four decades. The Court is leaving a growing range of decisions in the hands of national law-makers and judges, a trend that affects the level of scrutiny applied to Member Stateaction, the division of powers between the European and national judiciary, and ultimately the nature of the internal market. The book argues that these new-found 'passive virtues' are linked to a series of broader political, constitutional, and institutional developments that have taken place inthe EU.

Forfattere
Bibliotekernes beskrivelse This book investigates the Court of Justice's practice of deferring to Member State authorities in free movement law, examining the decision-making latitude accorded to national institutions by means of two deference doctrines, the margin of appreciation and decentralised judicial review.