- From the Ukraine to the Syrian Crisis 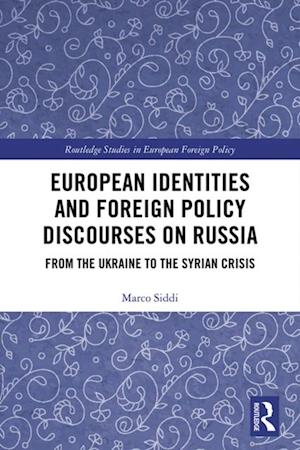 This book examines the relationship between national identity construction and current foreign policy discourses on Russia in selected European Union member states in 2014-2018.It shows that divergent national discourses on Russia derive from the different ways in which the country was constructed in national identity. The book develops an interpretive theoretical framework and argues that policy makers' agency can profoundly influence the contestation between different identity narratives. It includes case studies in policy areas that are of primary importance for EU-Russia relations, such as energy security (the Nord Stream 2 controversy), the Ukraine crisis and Russia's military intervention in Syria. Focusing on EU member states that have traditionally taken different stances vis-vis Russia (Germany, Poland and Finland), it shows that at the peak of the Ukraine crisis national discourses converged towards a pragmatic, but critical narrative. As the Ukraine crisis subsided and new events took centre stage in foreign policy discussions (i.e. the Syrian civil war, international terrorism), long-standing and identity-based divergences partly re-emerged in the discourses of policy makers. This became particularly evident during the Nord Stream 2 controversy. Deep-rooted and different perceptions of the Russian Other in EU member states are still influential and lead to divergent national agendas for foreign policy towards Russia.This book will be of interest to students and scholars working in European and EU politics, Russian and Soviet politics, and International Relations.