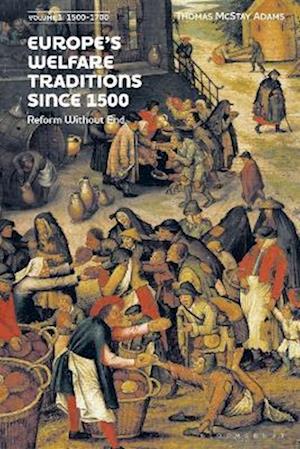 Tracing the interwoven traditions of modern welfare states in Europe over five centuries, Thomas McStay Adams explores social welfare from Portugal, France, and Italy to Britain, Belgium and Germany. He shows that the provision of assistance to those in need has faced recognizably similar challenges from the 16th century through to the present: how to allocate aid equitably (and with dignity); how to give support without undermining autonomy (and motivation); and how to balance private and public spheres of action and responsibility.Across two authoritative volumes, Adams reveals how social welfare administrators, critics, and improvers have engaged in a constant exchange of models and experience locally and across Europe. The narrative begins with the founding of the Casa da Misericordia of Lisbon in 1498, a model replicated throughout Portugal and its empire, and ends with the relaunch of a social agenda for the European Union at the meeting of the Council of Europe in Lisbon in 2000.Volume 1, which focuses on the period from 1500 to 1700, discusses the concepts of 'welfare' and 'tradition'. It looks at how 16th-century humanists joined with merchants and lawyers to renew traditional charity in distinctly modern forms, and how the discipline of religious reform affected the exercise of political authority and the promotion of economic productivity.Volume 2 examines 18th-century bienfaisance which secularized a Christian humanist notion of beneficence, producing new and sharply contested assertions of social citizenship. It goes on to consider how national struggles to establish comprehensive welfare states since the second half of the 19th century built on the power of the vote as politicians, pushed by activists and advised by experts, appealed to a growing class of industrial workers. Lastly, it looks at how 20th-century welfare states addressed aspirations for social citizenship while the institutional framework for European economic cooperation came to fruition