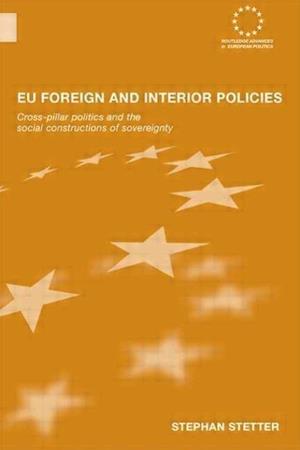 This book offers an innovative theoretical and empirical analysis of integration in EU foreign and interior policies across the three pillars, from the Maastricht Treaty to the Treaty of Nice.The establishment of the three pillar structure with the Maastricht Treaty has been one of the key transformations of European governance. This divided EU policies into three main areas: European Community, Common Foreign and Security Policy (CFSP) and Justice and Home Affairs (JHA) and for the first time the two sovereignty related areas of foreign and interior policies became part of the formal governance structure of the EU. This is the first volume to present a comparative perspective on how integration in both areas across the three pillars has contributed to the construction of a distinct sovereignty dimension of the EU. Drawing from sociological institutionalism and on the basis of the two case studies of EU Middle East and migration policies, it offers a comprehensive empirical analysis of cross-pillar policy-making dynamics in foreign and interior policies in the EU.EU Foreign and Interior Policies will appeal to scholars and researchers interested in international relations, European Union politics and Middle East studies.