- In Search of Appropriate Policies

indgår i serie The International Library of Environmental, Agricultural And Food Ethics 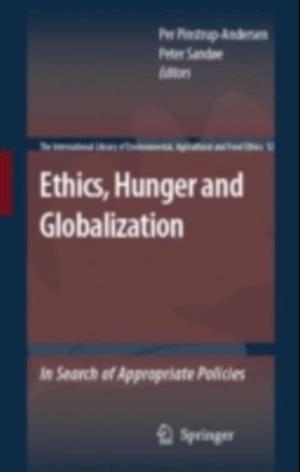 The book 'Ethics, Hunger and Globalization' adds an ethics dimension to the debate and research about poverty, hunger, and globalization. Outstanding scholars and practitioners from several disciplines discuss what action is needed for ethics to play a bigger role in action by governments, civil society, and the private sector to reduce poverty and hunger within the context of globalization. The book concludes that much of the rhetoric by policy makers is not followed up with appropriate action to fight poverty, hunger, and malnutrition and discusses the role of ethics in attempts to match action with rhetoric. The book also concludes that a better understanding of the values underlying both public- and private-sector action towards the alleviation of poverty and hunger would lead to more enlightened policies and a greater success in attempts to achieve the Millennium Development Goals.The interaction between ethical, economic, and policy aspects are discussed and scholars and experienced practitioners from several disciplines suggest how such integration may be promoted for the benefit of low-income people in developing countries. The cohesive, multidisciplinary, intellectual treatment of the subject of ethics and hunger makes this book not only intellectually stimulating but well grounded in realities. Taking into account the new evidence and the various perspectives presented by the authors of this book would undoubtedly result in a more enlightened debate, better government policies, and appropriate guidance of globalization for the benefit of the poor.